All the things you would find in a good AD password policy
After ArsTechnica’s article there are probably a few more items you should add to that list next time you change your password.

The Long and Short

The experiment that Nate ran initially was focused on passwords of no more than 6 characters which he pretty much cracked in seconds regardless of adding symbols and mixed cases. But as the length of the passwords increased so to did the time. The chart below shows how a simple thing as increasing the length of a password from 6 characters to 9 dramatically increased the time taken to hack 17000 passwords using brute-force. 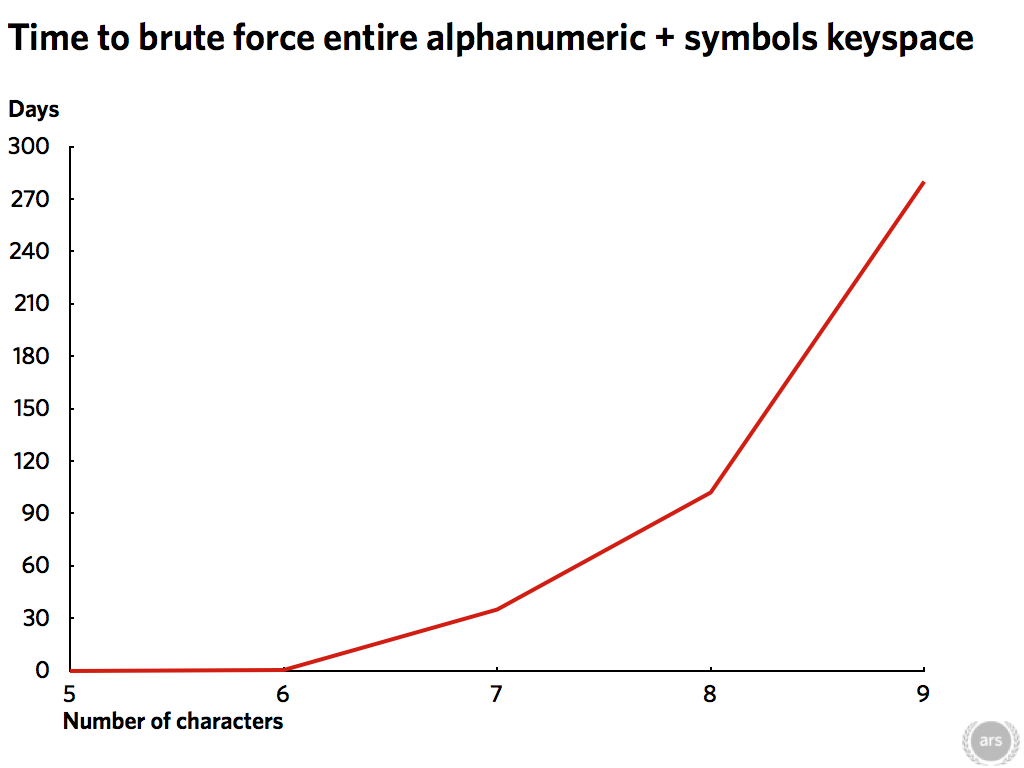 Avoid the pitfalls of small simple to remember passwords, long ones can be just as easy to remember.

Its all in the Patterns

One of the interesting points in the article is that hacking relies on patterns. Adding numbers and symbols you might think will help but if you stick to a common pattern for your passwords it really makes little difference. Avoid using typical password patterns like <word>+<3 numbers> or following the same one as your colleagues, once a hacker knows the pattern of one password they can pretty much expect all other accounts to follow the same rules.

The number of words in the Oxford English dictionary exceeds well over 100,000 but the words used in most passwords is limited to a small subset of this the same set you’ll find in wordlists used by hacking tools. Avoid using common everyday words, consider words that are not common, everyday words.

Its all too common to find only some end users following password policies and it’s usually the ones that don’t who have the most to lose. If you’re having trouble convincing people then show them how quickly these guys were able to hack 16,000 passwords! Getting everyone’s buy-in on using more complex password policies improves your network security and your users all round.
Connect with us on LinkedIn, Spiceworks, Facebook, Twitter or Google+.

Our solutions are available as an on-premise installation on your hypervisor, or we offer a unique managed cloud deployment in a data center near you.

This website uses cookies to improve your experience while you navigate through the website. Out of these cookies, the cookies that are categorized as necessary are stored on your browser as they are essential for the working of basic functionalities of the website. We also use third-party cookies that help us analyze and understand how you use this website. These cookies will be stored in your browser only with your consent. You also have the option to opt-out of these cookies. But opting out of some of these cookies may have an effect on your browsing experience.
Necessary Always Enabled
Necessary cookies are absolutely essential for the website to function properly. This category only includes cookies that ensures basic functionalities and security features of the website. These cookies do not store any personal information.
Non-necessary
Any cookies that may not be particularly necessary for the website to function and is used specifically to collect user personal data via analytics, ads, other embedded contents are termed as non-necessary cookies. It is mandatory to procure user consent prior to running these cookies on your website.
SAVE & ACCEPT